Home / About Us / Testimonials 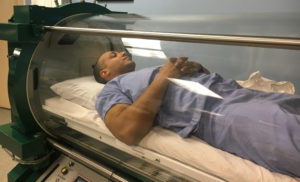 My name is John Giordano. I’m a competitive kickboxer and MMA fighter I’m also a dad, a husband and I work a full time job. Finding the time to be able to train 6 days a week 1-3 hrs a day sometimes twice a day is challenging with trying to balance all the aspects of my life. The workouts we put ourselves through are extremely taxing, grueling and long. It’s not easy to also find the energy to take care of my daily activities and responsibilities on top of training.

Recovery rest and healing is just as important if not more important than the training itself. Hyperbaric Oxygen Therapy has allowed me to be able to train at a high level and push my body further and harder than I ever thought I could.  It’s allowed 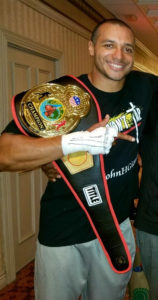 me to be able to train day in and day out, still have the energy to play with my daughter and put in the long hours necessary for work to support my family. Injuries are part of the sport and I’ve encountered a few of them over the years. HBOT has allowed me to quickly bounce back from injuries that are sometimes considered career ending. It’s allowed me to heal faster and be stronger than I could ever be without it. I’ve always had this dream of fighting competitively and I’m able to train alongside and with current and former ufc fighters. I’m not where I want to be yet and I have goals for the future of my career, right now I’m enjoying the journey. Thanks to North Shore Health and Hyperbarics I’m able to compete and train when otherwise I might not have been able to.

I have received treatment at the Hyperbaric Center since 2012. During this period my condition has improved greatly.

I am allergic or responded poorly to the “usual treatment”. Hyperbaric treatment has allowed me to return to work. I feel better than I have in many years.

The staff is professional, knowledgeable, patient and kind. They have made all my treatements enjoyable. 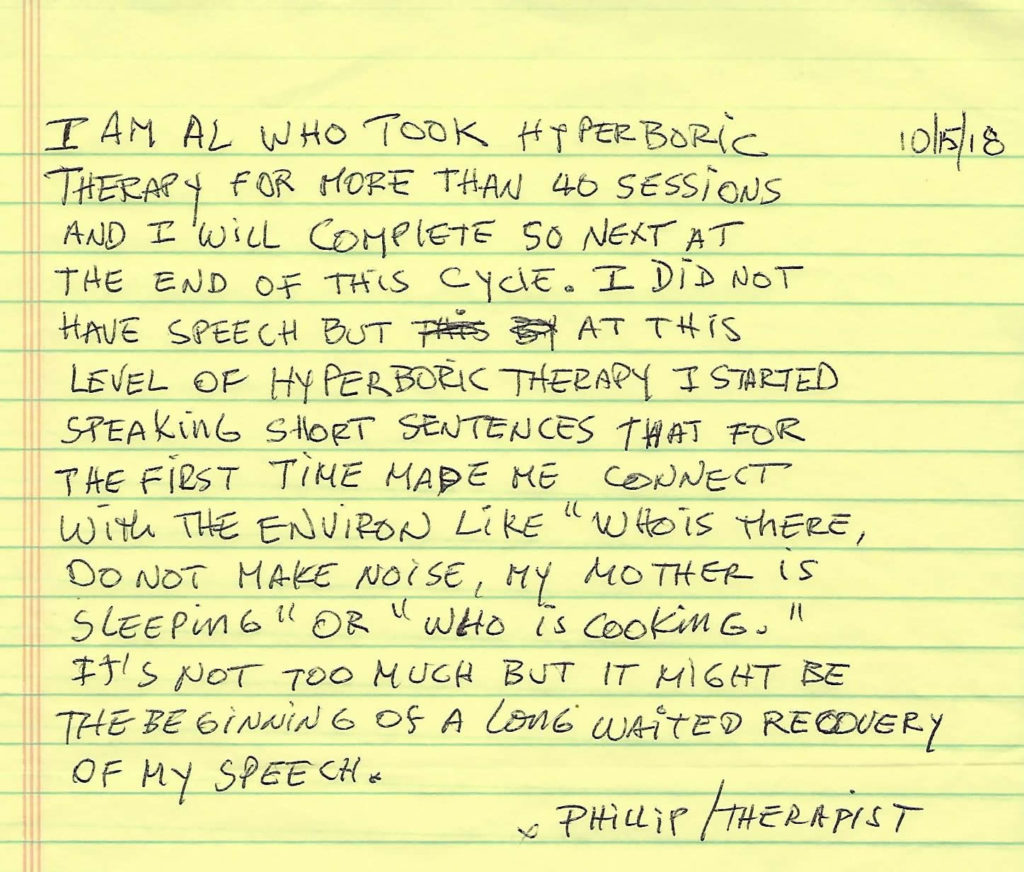 I am a 67-year old Throat Cancer patient who has undergone multiple surgeries, over 30-Radiation Treatments and Chemotherapy. I have been subject to excruciating ear and neck pain during the course of my treatments over the last 10-months. In a last ditch effort to help alleviate the pain my Surgeons recommended Hyperbaric Oxygen Therapy, a form of treatment that re-creates a below sea-level environment while pumping in pure oxygen to a Chamber. A Chamber which I resided in for 2-hours a day, 5-day’s a week. Because the pain was never-ending the only way I could remediate it was through pain medication. Inspiration is borne of desperation so I began researching Hyperbaric Oxygen Therapy. I came across an independent facility operating in Manhasset. North Shore Hyperbaric’s became my part-time home for the next 60-days. Directed by Dr. Kevin Harrison, a surgeon and staffed with an expert and caring technical staff, I was introduced to Hyperbaric’s. In no particular order my symptoms were indescribable and unbearable ear and neck pain, hyper-excretion of the salivary glands, loss of smell and a complete loss of taste. 33-Radiation Treatments will do that to you every time. Such was the condition of my throat that I had a feeding tube implanted in my stomach for 6-months. I could not speak for three. Anyone who would create a story like this is worthy of the karma they bring upon themselves. After only the second 2-hour treatment my neck and ear pain disappeared. That’s disappeared, like in gone. Perhaps a day before I began my treatments I filled my prescription for 90-Oxycodones. It is not quite 4-months later and the prescription bottle remains unopened and untouched. Despite my early and completely unexpected success, Dr. Harrison cautioned me about setting my bar too low. He said, without equivocation, that the other symptoms would be remedied, as well. Well, it is August 31, 2017 and my feeding tube is long gone, my excreting copious amounts of saliva is a thing of the past and I am drinking freely and eating, smelling and actually tasting most foods. Lest you think that Hyperbaric’s is soley for Cancer patients I would like to inform the reader that my Chamber mates were also diabetic wound-care sufferers, children and young adults with Autism and Cerebral Palsy and patients recovering from plastic surgery. Were it not for the care I received at North Shore Hyperbaric’s I would not be in the fully-functioning position I am today. It’s been 9-day’s since my last PET Scan and apparently I am in Remission. In no small part I have Doug, Suzanne, Kay Lee, Lisa and Dr. Harrison to thank. I have my quality of life back. I cannot recommend them and the science itself, enough!

I had exceptional care and comfort by Dr. Harrison and his team so I am very happy to be able to endorse NSH&H (Health and Hyperbarics). Not only did I benefit extraordinarily as I improved medically from the oxygen therapy but I appreciated the kindness of the professionals caring for me. Each one contributed to the success of my treatment. Thank you so much.

4.0
Based on 7 reviews
See all reviews
Anthony B.
I was VERY pleased with... the hyperbaric treatments and staff. Everyone at the Massapequa hyperbaric place was totally professional and friendly. I went for 52 treatments and now I am happy to report that my osteomyelitis is gone and I still have my toe and foot. I am thrilled about this because I was looking at having an amputation thank you to doctor Harrison who took care of me I am grateful to him and his exceptional staff. I use to look forward to visits with Randy and had exceptional care from Mike and Nick who took good care of me. Vicky at the front desk is most knowledgeable and kind. A GREAT BIG THANK YOU TO THE ENTIRE STAFF IN MASSAPEQUA. Now that my osteomyelitis is gone I can get a kidney transplant. Thank you to this amazing team.Maryann Buonaspina using my husbands account.read more
Dr D.
I had extreme lethargy... due to multiple factors. It was hard to function and do my daily tasks. Dr. Harrison was so compassionate and honest. I have completed 10 sessions and have more than all my energy back. Office is spotless. Nick and Mike are fantastic, I feel safe when I am in the chamber knowing they are there. Very grateful.read more
Martha M.
Highly recommend this... center! Clean, professional and very friendly. This was my first time having hyperbaric treatments. I had had surgery and had some...read more
virginia C.
Thank goodness that I... found this facility! After a month of my wound not healing and getting so much disinformation on how to take care of it, I knew I had...read more
marlo
North Shore Health &... Hyperbarics oxygen therapy is an integral part of neuro trauma recovery.After speaking to Mike and Dr Harrison from my loved ones hospital bed, I was confident that my loved one would be in good hands.Lisa, the administrator, Dr Harrison and the clinical team, Mike, Liz, Victoria, & Nick are a knowledgeable and friendly team of empathic professionals.read more
Arnold K.
After Dr. Sasson sent me... to N S Hyperbarics I was treated by Dr. Harrison and his staff with the utmost respect. My wound was assessed by Dr. Harrison and he explained in detail how hyperbarics works. My wound is healing quickly. I am very grateful for the excellent care provided by everyone. Thanks to everyone for their great attitudes and concern.read more
Jeff G.
The whole office staff... is friendly, compassionate, and professional; my wife is going here for wound care and hyperbaric oxygen therapy. The combination of Dr. Kevin Harrison's excellent wound treatment, and the hyperbaric therapy, has made a huge improvement to her large wound area!read more
Michael S.
Recently finished 46... treatments for a very serious lower leg ulcer that was scheduled at one time for amputation.Dr Harrison and his staff were very...read more
Nina G.
Dr. Harrison is a... special kind of doctor, one who really cares about the well being of his patients and tells the truth without pulling any punches. So glad we found him after my partner was discharged from hospital and rehab with gaping wounds on his legs. Thanks for everything!read more
olga C.
Dr Harrison was... absolutely amazing. The professionalism is beyond words. The staff was always friendly and helpful. They made me feel like family. Last but not least, so happy with my results. Thank you all🙏read more
Ash U.
They have been doing an... excellent job treating my friend. If only there were more places like thisread more
Kaatsbaan D.
Jordan B.
My friend and bandmate... went there and have heard nothing but good things. Thank you to the Doctors and staff there for their helpfulness and professionalism during a difficult time.read more
SUPER S.
I couldn't ask for... better people to be working with. Every single human being inside has proven themselves to be compassionate AND intelligent beyond what I am used to!read more
Jacqueline C.
Mike and Liz are the... best! They don't make it feel like a medical visit at all! They are super considerate to your needs and are very accommodating. They're also super fun.Chambers are roomy and comfortable. Highly recommend!read more

Tennis takes place on the grass courts of Wimbledon over the next two weeks. And… [...]